Trade Paperback with Older YA Cover

Winner of the 2016 Oklahoma Book Award

The Boy Who Carried Bricks

Trade Paperback with Younger YA Cover

Abandoned by his father, neglected by his mother, shuttled between foster homes and a boys ranch

for most of his formative years, a young man refuses to
succumb to the fate that the world says should be his.

Born the second of five children to a woman who not once had a name to write in the blank space left for father
on her children’s birth certificates, Alton Carter does not mince words as he describes a childhood full of violence and hunger and neglect.

Early on, Alton decides he wants a “normal life”—even if that means standing up to abusive relatives and being teased by his siblings and cousins. Along the way, he keeps an eye out for those who might help lighten the load, never losing hope that such people exist.

Oklahoma artist Adam Headrick provided the mixed-media illustration for the cover of the trade paperback for Older YA audiences.

A True Story by Alton Carter

The Boy Who Carried Bricks 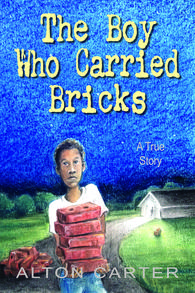 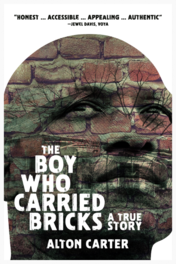